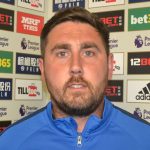 So I started my journey in grass roots football as a coach back when I was 17 years old.  I was actually playing for the Youth team at Halesowen Town and The Colts current Head Coach Bobby Glaze was my coach at the time.  I had always been keen to get into coaching and The Colts who I had previously played for as a junior player were looking for someone to run their new under 9’s team.  So myself and a couple of my team mates at the time put ourselves forward to run the team a very early on found a huge passion for coaching and started what has been a great journey in grass roots.  I stayed with that team for almost 8 years and enjoyed every single minute, I watched them transform from children in to young me and during that time saw them develop into fine footballers both individually and collectively.

After a few years away from grass roots, my stepson had got to an age where he wanted to play football so I started taking him back to my roots at HTC to their development centre, it was there that eventually after some persuading I made the decision to start again and run the new under 7’s.  The past four seasons have been quite remarkable, I was so lucky to be able to work with such a gifted group of boys and because of their talent and the way we run the side we have attracted more and more boys along the way.  They have come so far in the four years from almost baby’s really at 4/5 years old to national champions at 10 and I am still as passionate and excited about their development as I was four years ago.  We have seen four of our boys move on and now play academy football and I’m sure there will be many more to follow.

A Nottingham Forest Fan (please don’t hold this against me) but a secret Villa fan as the hubby is one! I have been interested in football for far too many years to say.  I love football but more importantly I am interested in the physical development and wellbeing of children, so they enjoy sport and play with a smile on their faces. I started out as a PE teacher then moved out of that in Marketing where I managed and supported one of the largest children physical development programmes in the UK for over 12 years.  Like many of us our children become involved in sports and this is how I came involved in Grassroots football three years ago.  Helping to support a new team setting us was one of a challenge but reinvigorated by passion for football again. I am sure many people would say that I spend too much time as a volunteer on football, but my passion is to build a strong club with the best training facility around with the rest of the committee members.

Assistant manager (Coach) to U11’s team playing in both the Junior Premier League on a Saturday and the SDYFL on a Sunday. I hold an FA Level 1 coaching qualification.  Having started out in 2014 I hit the ground running, thrust in to a new environment of grass roots football. At the outset I had no idea how rewarding an experience this could be. We have had ups and downs, but the experience has all been good resulting in the greatest achievement of been crowned JPL National Champions last season.  We have had many of our players trial at academies around the Midlands four of which have been signed and are currently representing League clubs.

I am a 42-year-old business analyst from Birmingham, moving to live in Halesowen 11 years ago.  I have been involved in grassroots football since 2014 where I managed my sons’ team at Halas Hawks for two seasons, prior to moving to Halesowen Town Colts and taking on the role of Club Secretary.  I have been heavily involved in the great successes we have seen at the club over the last 2 years.

The first year in the role saw the club secure its first ever ‘Development Charter Standard Club’ status, as well as being able to successfully register the club in the elite NERF Junior Premier League, grassroot footballs ONLY national league.

We have grown our club to 17 teams, competing in all age groups across 2 different leagues, with our teams now training at our central training facility at Leasowes Sports Centre.

Club Welfare Officer and also manager to U14’s South team in which my son plays in.  I hold an FA Level 2 qualified coach qualification, FA certificate as a club welfare officer and I have a real passion for grassroots football.

I have proudly seen some of my players go on to play in various academies and development centres around the Midlands (Wolves, WBA & Stoke City to name a few); all of which had great foundations from their time at Halesowen Town Colts.  I am always floating around at Leasowes on Thursday evenings where my team and the U7 upwards also do.

My name is Rob Glaze, but the football family call me ‘Bobby’, I have coached since I retired from playing for over 28 years.  I am currently Head Coach at Halesowen Town Colts.  I have coached at three academies over a ten-year period, I have coached at Aston Villa, Wolverhampton Wanderers, and Birmingham City. The experience that I have gained from working at these clubs, has been invaluable for me as a coach, and I would like to think that I have passed some of this knowledge onto the many coaches I have had the privilege to work with.  I am currently a UEFA ‘B’ licensed Coach, and I also hold the FA Youth Award.  I am also a current member of the PFA (Professional Footballers Association).

My playing career started when I was a young lad of ten years old, when I played for my school team, I then later on when I was 13, I got chosen to play for the district team, which was Brierley Hill and Dudley School Boys, I then got selected to play for the county side, which was Worcestershire, which I represented for 2 years.

I then got spotted playing for Brierley Hill & Dudley School boys by a scout from Aston Villa, I signed schoolboy forms, and from there I signed as an apprentice professional at the age of 15, but I was released from my contract, and then went to play in non – league, where I played for, Halesowen Town, Worcester City, Stourport Swifts, Bilston Town and Dudley Sports.

I have always been in love with the game, and I decided, when I had retired from playing, I would like to go into coaching, and put something back into the game. So I could hopefully give up and coming young players some of the experiences I had, and I would like to think I have achieved that in some way.

Like most volunteers within grassroots clubs I became involved with the club when my son was asked to play for a team a little over 3 years ago which brought me back to the club where my first affiliation started nearly 30 years prior.

I currently hold an FA Level 2 coaching qualification, which as I always like to keep progressing further will be added to in the near future for personal development but also to help gain further knowledge, skills and tools to help develop those that I coach.

I have a great love of football and most of my spare time is associated with the game in one way or another, whether it be playing, coaching, attending courses, watching premier league, non-league or grassroots matches so is great to support and enhance that same passion others have for the game.

I think, like most grass roots coach’s, my journey started almost by accident when my son became part of a group of 7-year olds who were to become the new in-take for Halesowen Town Colts FC some 5+ years ago.

From an early stage I noticed that there was no real focus our attention given to goal keeper coaching and most of the kids at that early age had no real interest in being a goal keeper, they all wanted to be star goal scorers and the position of goal keeper was seen to be given to the ‘weaker’ player. I decided to offer some specific keeper training and would take a couple of players at a time and introduce a fun element to what is a very important position on the pitch, this training soon became very popular within our team and we now have a couple of very competent keepers who thoroughly enjoy their position.

A couple of years ago I took my FA Level 1 in goal keeping & have since had the immense pleasure of coaching some of the other goal keepers within Halesowen Town Colts.